Monero is a decentralized open-source digital currency that was created in April 2014. The cryptocurrency focuses on scalability, privacy, and decentralization, and easily runs on Linux, Andriod, Mac, Windows and FreeBSD. Launched under BitMonero, it is a compound of Bitcoin and Monero. After five days, the cryptocurrency community shortened its name to Monero. Just like other cryptocurrencies, Monero works on CryptoNote protocol that possesses complex algorithms that are hard to solve. 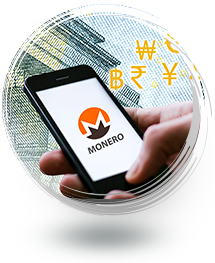 Monero was a pre-announced launch of CryptoNote protocol. No instantmine, premine, or block reward portion goes to the development of Monero. The founder of Monero proposed some changes to Monero that cryptocurrency community did not agreed with. Post that, the core team of Monero bifurcated the project into community and new core team. Since launch, the cryptocurrency has gone through numerous changes. It was migrated to various database structures in order to provide less ring signature sizes and great flexibility and efficiency.

To make transactions private, RingCT was implemented. All improvements or changes have been made for better privacy and security. With the aim of security, ease of use, and privacy, the digital currency continues to develop. In the year 2016, owing to the adoption by darknet market AlphaBay, Monero experienced prompt growth in transaction volume and market capitalization. However, the market got closed by law enforcement in July 2017. Thereafter, on 10th January 2017, Monero transactions privacy was made more secured by confidential transactions algorithm suggested by Gregory Maxwell (Bitcoin Core Developer). The algorithm helped in hiding the transaction amounts along with Ring Signatures improved version. Miners should trust Monero for the transactions without a risk of attack or error. Keeping this factor in mind, Monero provides block reward to the critical members of the cryptocurrency network. Using resilient encryption tools, every transaction is cryptographically secured on the network.

The second important feature of Monero is privacy. The network of Monero protects users’ information. However, the privacy level should be accessible to users, whether they have idea of how Monero works or not. In addition, a user also needs to trust the network and does not change the spending habits.

Monero network is committed to provide the decentralization. The “proof-of-work” algorithm helps in Monero mining on computers. Monero nodes connect with I2P in order to decrease the revelation of censorship and transaction information. Meeting logs created by developer are published online that are entirely visible to public.