Profits from Cryptocurrency Mining- What to Expect? 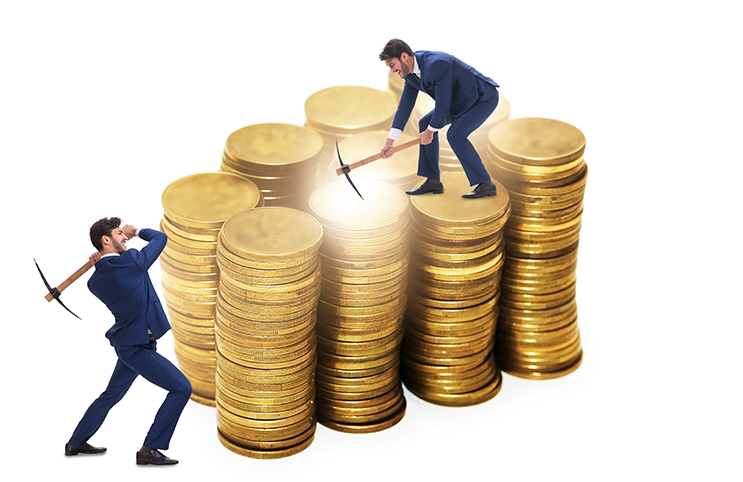 Most people take part in cryptocurrency mining with the simple goal of making money. But how many actually get into the details of cryptocurrency mining and try to understand the nuances of the mining industry? No wonder, many of us end up disappointed as our final earning stands nowhere close to the expectations set at the beginning. The value of cryptocurrencies fluctuates like figures in the stock market and the rate of return abruptly goes down.

To help you address your growing concerns, we thought of looking at the world of cryptocurrencies from a fresh perspective and learn from the scratch as to how cryptocurrency mining works and how the revenue is fetched, so that you know that the fluctuating rates are not much of a concern.

The mining profits depend on a number of relevant factors, including the status of global economy. The mining reward, the processing fee, as well as the exchange rate- all these determine the profitability of cryptocurrency mining. News also plays a major role in this regard- the good news, the bad news, or simply, the general media buzz. Let’s study each of these factors individually.

Reward Reduction and Difficulty in Mining

Cryptocurrency mining is the process of block generation in a blockchain which records all transactions. Every time an individual miner or group miners locate a new block by solving algorithmic equations, they get mining rewards for the hard work done. This reward is essentially a share of the cryptocurrency that is being mined. This cryptocurrency can either be Bitcoin or any other altcoin. This may be compared with the typical work for hire. Individuals work to maintain the blockchain network- locate new blocks, confirm transactions and then get paid for their work with a share of Bitcoin or altcoin (as applicable). With Bitcoin, it generally takes 10 minutes to verify the transactions.

If it takes less than 10 minutes, this means the total combined power of all the miners on the network has increased. So, how will the system respond in this case? Evidently, it will increase the mining difficulty so as to adjust the time slab to its original 10 minutes. At the same time, if the process gets delayed and the time taken exceeds the usual 10 minutes, in that case, some miners may have abandoned the global network and the hash rate of the mining devices has diminished. If such is the scenario, then the network will adjust its difficulty level. This difficulty level of the Bitcoin network is automatically calculated every time after the generation of 2016 fresh blocks and is not dependent on the discretion of the miners- whether individual or a group. On an average, it happens every 14 days.

The mining reward is given specifically to that miner who located the latest block. However, owing to the fact that it is a lengthy procedure, people find it more beneficial to be part of a group in order to locate new blocks at a faster speed. The total hashing power of all the individuals in a group increases the possibility of a group mining reward. Given the fact that everything falls in place, the mining reward is divided among the participants of the group as per individual contribution. It all depends on the hashrate- the more you contribute, the more reward you get. This is how the mining pools operate. However, the mining reward is mostly dependent on the difficulty of the network. The higher the difficulty, the harder it gets to trace a block. To put it simply, increased hashrates do not guarantee mining rewards; nonetheless, it does increase the chances of locating a block.

The more number of miners join the network, the lesser the revenue generated by each one of them, owing to the fact that the competition gets tougher and that too for a limited reward.

Therefore, a person who wishes to acquire a more or less consistent share of mined Bitcoins should update the mining hardware regularly. However, one should always bear in mind that the number of miners at work will always have an impact on the mining profitability in one way or the other. Also, closely monitor the changes in the network difficulty.

The mining fee is fixed on most of the mining platforms. This is basically used to pay for the electricity bills, offer support to the miners, change the outmoded hardware, and provide a justification for depreciation. In a world where people use fiat currencies to make transactions, only few of us use cryptocurrencies to pay bills.

For the convenience of the online users, the automatic system converts USD to BTC, since your account balance is in Bitcoin and the network subtracts the sum from your daily earnings. This BTC earning varies most of the times owing to the variations in the rate of Bitcoin; however, the USD equivalent evidently remains the same. One can check the same with the help of a currency calculator.

The transaction fee for Bitcoin is a different story altogether. The value is never static and varies most of the times. It all depends on the global scenario of Bitcoin as well as its current rate. If you check out the dynamics, you will realize that there has been a peak in the month of December last year- the average transaction fee touched the $50 mark.

What exactly does this indicate? Before you make a withdrawal or a transaction, review the current fee and then consider closely. Would you spend $10 to withdraw $50?

Similar to other cryptocurrencies, BTC has a certain exchange rate with respect to USD, Euro, Yen and other such fiat currencies. The higher the exchange rate, the higher will be the mining profitability. This is simply because mining helps you earn BTC and you get to exchange them for fiat currency such as US dollars at any time. Despite the declining rate, Bitcoin mining continues to fetch good profits. This is because the rate of Bitcoin evidently goes up despite the temporary downs. In times of fluctuations, the best thing to do would be to hold your horses and not give way to panic. Instead of selling off the Bitcoins right away, wait for the rates to become stable again.