What is Initial Coin Offering ( ICO) ? 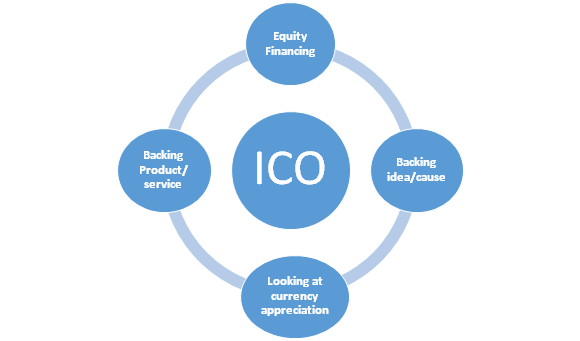 Your pursuit for the hottest crypto trend may be over by looking at the development of Initial Coin Offering mechanism, which is also commonly referred to as ICO in the cryptocurrency jargon. ICO has gained a prominent position as it is evolved as highly sought after instrument to support fund-raising initiatives in the domain of virtual currencies. Initial Coin Offering involves a presale of tokens or virtual coins associated with a project of blockchain.

ICO is backed by a resounding success of one of the most successful Cryptocurrencies, Ethereum. The trend gained considerable momentum since 2013 and is now universally accepted as more and more crypto projects followed the process of Initial Coin Offering to raise funds for their projects. ICO is nothing but a public offer of new cryptocurrency tokens or coins in exchange for other established Cryptocurrencies such as Ethereum or Bitcoin.

What is an Initial Coin Offering?

ICO or Initial Coin Offering aims at facilitating a mechanism to allow new projects acquire funds by exchanging their underlying virtual tokens or Cryptocurrencies for Bitcoin or Ether. ICO bears a close resemblance to an Initial Public Offering that enables investors to buy shares of a new company.

In spite of its recent development, ICO has been able gain a significant traction and interest across the blockchain universe. Some experts argue that ICO projects promote unregulated instruments that help founders raise irrational volume of capital. On the other hand, considerable number of investors and experts feel that an ICO must be accepted as an innovative fund-raising mechanism to support new projects.

Since the Ethereum ICO offer, there is a virtual rush for Initial Coin Offering by more and more new projects in the cryptocurrency ecosystem. ICO offers an easy and investor-friendly option of selling pre-designed crypto-tokens on a broad assortment of exchanges. In fact, if the new cryptocurrency is backed with a huge demand, then investors can leverage any exchange to purchase the virtual currencies.

In view of this development, ICO has all characteristics and potential to develop as security of the future financial system. ICO is the most practical way to raise millions of dollars worth in cryptocurrency in a very short span of time.

Ripple Labs need to be credited with the maiden Initial Coin Offering campaign that was launched five years ago for funding development of its platform known as Ripple. The company offered hundred million XRP tokens that were sold with an aim to build Ripple payment system.

There are many Cryptocurrencies that received funding via Initial Coin Offering including the most notable Crowdfunding executed by Ethereum Foundation in 2014 that collected a whopping $20 million by exchanging one ETH for .0005 BTC. The ETH ICO can is attributed for the development work at Ethereum Foundation. Ethereum is therefore not only credited for unlocking the huge potential of smart contracts but is also responsible for establishing an entirely new ICO generation.

Ethereum ICO boosted the credibility of Initial Coin Offering mechanism and the Crypto community started appreciating it as a highly popular, simple and feasible mechanism of Crowdfunding. The offering helped Ethereum exploit the huge scope of ICO to the extent that it discovered a killer app of its own in the process of fundraising and Crowdfunding.

Decentralized networks are devoid of any central point of failure. Thanks to an innovative use of cryptography, these networks are highly secured against cyber attacks as well as from any unauthorized access by fraudsters. Blockchain technology empowers applications with a built-in robustness.

Ethereum backed Crowdfunding became a default process for an entirely new and thriving generation of projects. DAO is regarded as the most awesome demonstration of Ethereum’s huge potential in terms of smart contracts. Although, DAO succumbed to hacking, it allowed the holder to get involved in its governing process of the project that could raise ETH worth $100 million through Crowdfunding.

Thanks to the process of ‘Initial Coin Offering’, every new company or any individual can easily launch freely exchangeable tokens for the purpose of fund-raising. ICO has not only contributed to the decentralization of money but has also facilitated decentralized trade as well as stock creation.

The very fact that Initial Coin Offering is not a regulated process, makes it highly attractive to fund-raisers, developers, and investors who need not go through the overwhelming and cost-intensive process of regular funding initiatives. It is very difficult to establish a legal status of ICO because majority of such processes are performed in gray environment.

It is predicted that the process of Initial Coin Offering could be brought under the legal gambit some day because the recent failure of DAO has been able to generate enough dust around ICO. This could potentially impact profitability of such initiatives because of greater costs of legal compliance.

Past, present, and future of ICO

As already mentioned, Ripple literally succeeded in creating ripples by being the first token that received crowd funding support through an ICO. Its value trend resembles an ECG pattern and offers no specific direction to investors. Next was also launched through ICO and has been fund to offer a stable performance.

We wanted to inform all our readers that HashGains will soon be out with their ICO . Till that time, keep yourself abreast on ICO with our blogs.