Three years ago, Marc Andreessen (Silicon Valley Investor and internet pioneer) explained how the Bitcoin blockchain technology is similar to 1990’s World Wide Web. He predicted the future of blockchain technology by saying that it is the future payment system and it will create a disruption wave in the financial industry. Today, everybody can see the immense growth of Bitcoin and other cryptocurrencies too. The technology has made significant impacts on various industries. However, under the success of this technology, there are some challenges that have been faced during its adoption. What are those challenges, to make you informed here is a blog post. Read on! 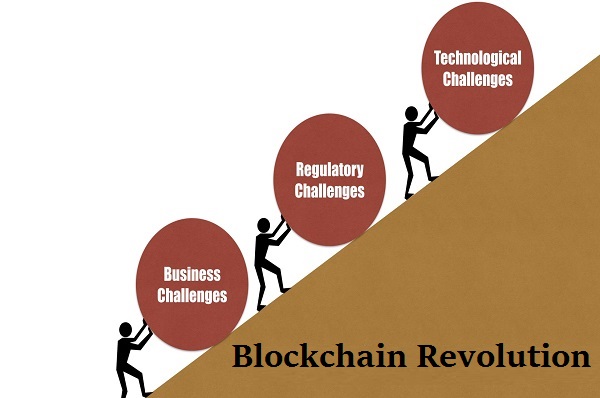 According to WEF report, the collaboration in between financial institutions is a key to overcome the blockchain challenges. In September 2015, to overcome this challenge, nine banks consortium joined together and launched R3 CEV in order to encourage adoption and promote industry standards. Goldman Sachs was among the top nine members in the consortium. Along with Santander, Goldman is also a rival blockchain consortium investor called DAH – Digital Asset Holdings. To settle financial trades, DAH developed software which make use of distributed ledgers. The aim to create the software is “open standard cross industry”.

The second biggest challenge is security. It is divided into two categories – cybersecurity and data security. The encryption level and network security may vary widely, in case single node is break the entire network security will be in danger. Hence, the network has to be really strong. Besides the changes that occur through network of nodes, the cyber-security in the blockchain network is a concern.

Most banks generate loads of revenue from financial transactions and handle the effort required manually. In this scenario, if blockchain is applied, then there will be no need to pay the bank in order to make transactions. As per Anthony Watson, Uphold CEO, “banks wants to control Blockchain instead of driving its reform so keeping that in mind we are trying to regulate blockchain technology in order to offer free money transfers globally”. However, the sharing costs mechanism among the involved institutions has to be first properly developed and then implemented. If the mass of institutions participates in the network in order to support the distributed ledgers then only this network will make it worth.

According to a report by World Economic Forum (WEF), Blockchain has an immense potential to become the global digital financial system. The blockchain ledger is not ready to cater to the scale of financial transactions. As per Roger Oliphant (Chief Architect of ACI Worldwide), to confirm every transaction, multiple blockchain nodes are needed. Therefore, in order to become a global financial system, the process should be 1000 times faster before the acceptance of this technology by banking institutions globally.

As there is no governance involved in the blockchain technology, so most of the businesses are not ready to accept this technology in order to prevent from scams. In businesses, continuous monitoring and policies establishment is much needed and it should be properly implemented. The Blockchain technology founder and CEO, Mike Gault believes in bureaucracy biggest problem. Considering the financial crisis in 2008, the top global banks did not accept it. Replacing the old financial system is a big task and not most of the banks might not have the appetite to accept it.

None of the government have issued the blockchain regulations; however, US and EU government are constantly monitoring the developments. According to a report by European Parliament’s Committee on Economic and Monetary Affairs, the potential risks include governance gaps, money laundering, systemic risk, fraud, and terrorist financing. Therefore, banks and financial institutions are still testing this technology and checking its regulatory framework.

In a nutshell, there are plenty of barriers in the blockchain technology that still needs to be look after to make it global digital financial system.